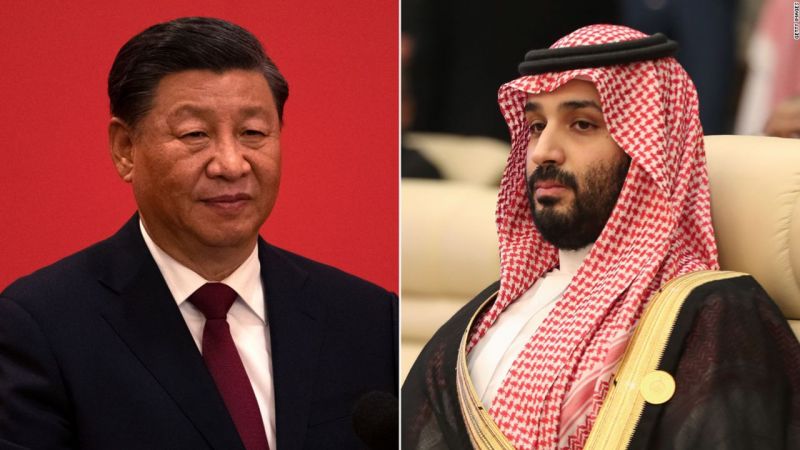 When Chinese President Xi Jinping lands in Riyadh in the coming hours Saudi leaders are expected to receive him with the pomp and circumstance normally reserved for the kingdom’s most strategic ally, the United States.

The multiple-day visit will include two conferences that will gather leaders from across the Arab world. Dozens of trade, economic and military agreements – to the tune of tens of billions of dollars – will be signed.

Saudi leaders will infuse the trip with a dose of spectacle. Traditional sword dances are likely to be conducted at lavish receptions. The Saudi king – or his powerful Crown Prince, Mohammed bin Salman – may bestow the Chinese leader with some honors and medals. Many more extravagant expressions of friendship will pepper the diplomatic proceedings, all with a view to underscoring the deepening partnership between Beijing and Riyadh, reports CNN.

It will be reminiscent of the no-frills-spared treatment received by US President Donald Trump during his visit to Riyadh in 2017. That trip was also a carefully choreographed three-day event designed to dazzle, even if sometimes clumsily (the true meaning behind the viral image of Trump touching a glowing orb remains a mystery).

Xi’s red-carpet welcome will be a far cry from President Joe Biden’s trip to Riyadh this summer. An unsmiling Crown Prince Mohammed bin Salman greeted the President with a fist-bump then publicly embarrassed him during a televised roundtable meeting, announcing a limited increase in oil production that fell far short of US demands. While bin Salman uttered the decision, Saudi state television turned to a visibly exasperated Biden, who appeared to have been caught off-guard by the development.

By striking a sharp contrast with Biden’s visit, the pageantry of Xi’s trip to Saudi Arabia carries an implicit message to the US. Despite Washington’s repeated pleas to its Gulf Arab allies to spurn China’s commercial carrot, the region’s relationship with Beijing continues to evolve, advancing not only in trade but also in security.

“The first message is that this is a new Saudi Arabia. This is a new Gulf. This is a new reality,” United Arab Emirates analyst and Visiting Senior Fellow at Harvard University Abdulkhaleq Abdulla told CNN.

‘A milestone’ in relations

The summit marks a “milestone” in Chinese-Arab relations, as one high-level Arab diplomat put it to CNN earlier this week. It also represents a major diplomatic triumph for Mohammed bin Salman. For years he was frozen out by the West following the murder of journalist Jamal Khashoggi at the Saudi consulate in Istanbul in 2018; Now, MBS, as he is known by many, is set to convene meetings with Xi and at least 14 other Arab leaders on short notice.

For China, meanwhile, it is a chance to expand its geopolitical footprint in the US’ former backyard – and Beijing will also need more Saudi oil as it finally starts to loosen Covid rules.

Two decades ago, China’s leaders were personae non grata in a decidedly anti-communist Saudi Arabia that had thrown its lot in with Washington. Back then, the US was the biggest consumer of the kingdom’s oil. Today, the US consumes only a fraction of that Saudi oil, and China is Saudi Arabia’s biggest client and trading partner. Exports to China exceeded $50 billion last year – more than 18% of the kingdom’s total exports.

The shifting trade relationship prompted a shift in US attitudes towards its Arab allies. In 2016, when former President Barack Obama’s administration signed a landmark nuclear deal with Iran, Washington side-lined its Arab allies in the region, Iran’s long-time foes, from the negotiation process. US tolerance for the Gulf’s autocratic style of governance, and its poor human rights record, also began to waver. The US’ military presence in the region – one of its largest in the world – dwindled.

Increasingly, Gulf leaders began to speak publicly of a post-American Middle East. The Gulf, officials said, would have to try to cut a path without its major security guarantor, the United States. That attitude appeared to have precipitated a Trump-backed wave of normalization of relations with Israel, known as the Abraham Accords, despite the continued popularity of the Palestinian cause among the Arab masses. It also triggered a begrudging rapprochement between Saudi Arabia and Iran, and a full restoration of relations between Abu Dhabi and Tehran.

Over the last year, Gulf Arab countries appear to have ramped up their independent-minded policy. While for decades they walked in lockstep with US foreign policy, they have lately been stepping out of line. Gulf leaders made clear that a growing relationship with Russia would remain unscathed after Russia launched a war on Ukraine this year, impeding an international effort to isolate Moscow. At times, Gulf leaders seemed to work in cahoots with Russian President Vladimir Putin over oil policy.

On China, the Gulf has flouted many warnings from the US about growing partnerships with Beijing and Chinese companies. Last year, Emirati officials accused the US of “bullying” them into shuttering a Chinese facility on Emirati soil. When the US threatened to pull a landmark deal to sell F-35 fighter jets to the UAE over the oil-rich state’s 5G deal with Chinese tech giant Huawei, Abu Dhabi carried on with the agreement.

The relationship with China is evolving militarily as well, to the chagrin of the US.

“Saudi is, of course, not indifferent to the US which continues to be a key partner. But the Kingdom has learned the hard way that the US cannot be relied on consistently for support,” said Ali Shihabi, a Saudi analyst familiar with the Saudi leadership’s thinking.

“The Kingdom has to work around that reality and develop multiple key relations in an increasingly multipolar world. That is a process that began a few years ago and is irreversible.”

“(Xi’s) visit will be a state visit that crowns this growing relationship with China,” he added.

When Trump visited Riyadh in 2017, it was his first overseas trip as president. He seemed to signal a U-turn from the Obama administration’s disengagement from the region. America was squarely in the Gulf Arab’s corner again and Gulf Arabs would embrace him with open arms. It set the tone for a fraught relationship between Riyadh and the Trump administration.

As MBS clamped down on dissent – culminating in the Khashoggi murder – Trump’s support for the young prince was unwavering.

Trump also seemed to, at least partially, be doing the kingdom’s bidding by pulling out of Obama’s nuclear agreement with Iran, unleashing a torrent of sanctions on the country despite Tehran sticking to its side of the agreement.

But then in 2019, missiles launched by the Iran-backed Yemeni Houthi rebels rained down on oil processing facilities in Saudi Arabia’s Abqaiq and Khuraiss, knocking off nearly half of the kingdom’s oil production.

The Trump administration did not come to its ally’s rescue and Gulf Arab states saw the writing on the wall: the region’s security could no longer be outsourced to the US, regardless of who sits in the Oval Office.

As Xi prepares to touch down, the UAE’s Abdulla said: “If America is in the mood to pursue a better relationship, then it has to be more committed. If we don’t get this then it might be time to part away from each other, gradually, slowly. The ball is in Washington’s court.”