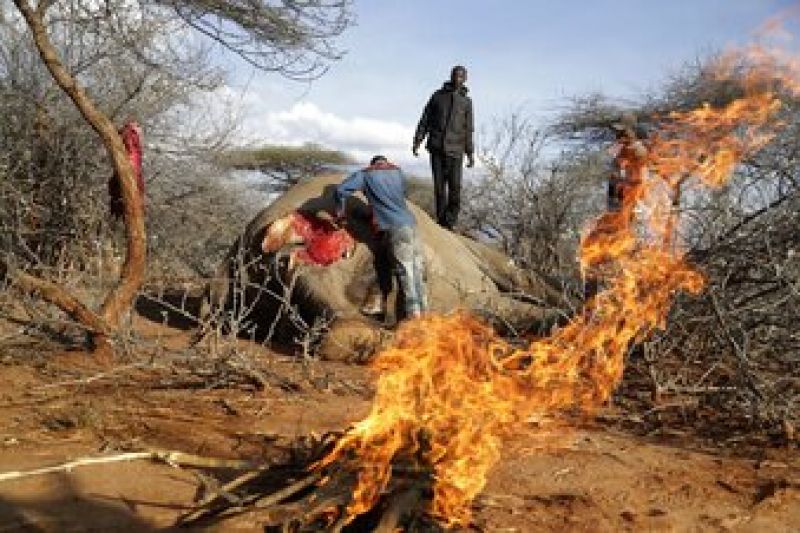 Locals cut elephant meat that was killed by Kenya Wildlife Service rangers after the elephant killed a woman while wandering for water and food in Loolkuniyani, Samburu County in Kenya on Oct. 16 2022.

After four consecutive years of failed rains causing some of the worst conditions in 40 years, wild animals have become commonplace in the county's villages as they search for food. Many don't survive, providing herders an unfortunate lifeline as they cut chunks of meat from their carcasses.

“I have suffered from hunger for a long time,” said 37-year-old Samburu resident Frank Aule. “If I run into such a carcass I would not think twice about eating it as I have to eat to survive.”

Kenyan authorities count that the drought has killed over 200 elephants, nearly 400 common zebras and more than 500 wildebeests among several other species in the past nine months. Many of those that survive are starving, weak and frequently coming into contact with people.

How to better protect fragile ecosystems from a warming climate, including Kenya's savannah grasslands, will form part of discussions at this week’s United Nations biodiversity conference — known as COP15 — in Montreal in Canada. Governments are working to come up with a framework of how the world should protect nature and aim to set goals for the next decade. Conservation groups say current programs aren’t working.

The Kenyan government has provided some relief supplies like water, forage, hay and salt licks for wildlife in the region, but animals are still forced to travel further into residential areas in their search for food and water.

“Elephants tend to be attracted to the trees that I planted in my homestead,” David Lepeenoi, a 54-year-old resident of Samburu, told The Associated Press. “The trees and water points are the main source of conflict between elephants and the community.”

“Where we have reported cases of wildlife dying, it is not actually within the parks,” said Jim Nyamu, who helps run the Elephant Neighbors Center. “That tells you they were actually looking for where they used to forage: the corridors, migratory routes that have been blocked by the human interface.”

Records from conservation charity BirdLife Africa show that dozens of birds are also dying in northern Kenya, most likely from starvation.

“Carcasses of migratory birds, such the European Roller, could be seen in the expansive dry landscapes,” said the charity’s Alex Ngari. Over 300 bird species on the continent are already classed as globally threatened or critically endangered.

The drought has also devastated communities and is leading to the loss of livelihoods, livestock deaths and failed crops. Farmers are instead felling dried trees to produce and sell charcoal to make ends meet leading to even more biodiversity loss in the region, said Paul Gacheru from the conservation group Nature Kenya.

“A concerted call toward supporting local communities to cope with the impacts of climate change is needed," said Gacheru, adding that local people need less destructive ways to adapt to the warmer, drier climate.

Communities across the continent are facing similar losses. The Okavango Basin in southern Africa, which provides water for one million people and half the world's elephant population, has suffered as climate change, urban development and deforestation depletes its resources.

“Putting important ecosystems and wildlife at risk is negatively impacting people’s lives and livelihoods,” said Vladimir Russo, an advisor for National Geographic’s Okavango Wilderness Project. He said that poorly preserved ecosystems cause more human-wildlife conflict and can lead to rise in poaching.

But “local community members and policymakers are now engaging in discussions to safeguard this ecosystem,” said Bogolo Kenewendo, a U.N. high-level climate champion.

More of that participation is needed at the summit in Montreal, policy and nature experts say, to preserve the continent's biodiversity.

Protection of nature needs to "make it onto the policy agendas of heads of state as has increasingly become the norm with climate,” said Linda Kreuger, who heads biodiversity policy at The Nature Conservancy.

In Samburu, conservation charities say they are doing what they can as natural resources dry up. At one elephant sanctuary in Samburu, staff say about 30 of 40 calves were rescued because of the prolonged lack of rain.

As well as the risk of starvation, drought “is a form of stress that makes the animals’ immunity to be lowered and this contributes to infections,” said vet Isaiah Alolo, who works at the Reteti Elephant Sanctuary. “In most cases, you find that the animal will die,” leading to many orphaned animals that need rescue.

“That brings a lot of pressure” for those working to conserve species, he said.

Staff at the Reteti sanctuary bring food and supplements from some 50 kilometers (30 miles) away from grasslands around Mount Kenya, said sanctuary caregiver Dorothy Lowakutuk. Those grasslands are also at risk of degrading if the drought continues.

“At least we ensure our elephants are recovering what they don’t get in their natural habitat,” said Lowakutuk.